Most of us would always be curious about our fate and the future. As such, people would come to Khun Mae to request Khun Mae to see and tell their fate and future. Should they change job? Get married to a particular person? Open a business? Travel overseas? etc…. Who is not curious to know what the future lies.

To most of the questions, regardless of the answers given, Khun Mae would always add in this crucial piece: a person who practices chanting and meditation can potentially change his/her fate. She said that we must do with faith and constantly encourage the listener to observe 8 precepts. Most people would probably half believed her.

It is very true- and to be honest, I would not believe it had I not seen the effects myself. Khun Mae once told a man who had just undergone brain operation twice (to remove a growth) that he would get better if he meditate and practice walking meditation. I was there in the scene because I drove Khun Mae to meet a nun who was the man’s auntie in July 2008.  The thing is that the operation had left complications on the man- it affected his eyes (his eyes produced very little tears and could not rotate well), and his overall coordination. He could not speak and was depressed (because he was at the peak of his life with a wife, 4 children and aging parents to take care off).

That time, I could hardly believe Khun Mae when she told him to try to practice walking meditation.  He got up and attempted to walk- and he wobbled and walked like a patient who had just recovered from stroke. My mom (who went with us), a nurse who had worked in spinal ward and dealt with numerous neuro related condition told me that would be a miracle if this man’s condition could even improve. The surgeons and doctors could not predict his outcome.

In April 2009, I could not believe my eyes when I meet this man, Ah Ho for the second time. I thought he was the man’s twin brother. The changes was close to miraculous. Ah Ho could walk and talk- no doubt not back to normal but he could sit down and have a decent conversation. Ah Ho has always been kind to people throughout his whole life- the only thing he had done is that he had killed animals, especially bats as he was there to collect fruits and the bats were at the trees. It was not for sport but to protect his livelihood. I remembered Khun Mae making the remark that his condition was due to the fact he had hunted in the forest even though no one had told her so. And a condition that arise due to kamma would need to be cured by practicing meditation and chanting. With the merits, one transfer them to the kammic debtors and request for forgiveness with all sincerity.

Ah Ho came and spent a few months in Thailand, and Khun Mae had placed him to practice in the cave. Initially, we were all worried for Ah Ho, as he operation had affected his movement and he sometimes was not stable when he walked. And the path along the cave and forest trails were uneven. The place is so dark at night and Ah Ho’s eyesight was not well. But Khun Mae told us not to worry and true to what she said, nothing happened. Ah Ho was often practicing meditation and chanting on his own. Khun Mae told him to dedicate his practice especially towards beings whom he had harmed. He listened and practiced dilligently without question and doubt. And his condition continued to improve. 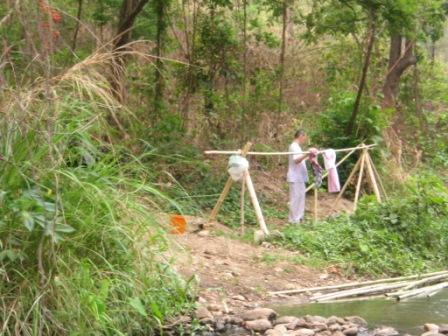 When he went back to Kuala Lumpur, he continued his daily chanting and meditation. As he is very at ease with the forest, the took daily walks at the forest area located behind his home. But still, his condition was not good enough for him to work.

Then when Khun Mae was down in Kuala Lumpur in September 2009, Ah Ho came often to pay respects to Khun Mae. Each time, he relied on transport from other people to take him to the place where Khun Mae is staying. One night, he could not find transport and he wanted to see Khun Mae. He decided that he would try to drive there himself. He told me that he drove so slowly that many cars honked at him.

After succeeding at his first attempt of driving again (since years of not driving), he had started to drive more regularly. Prior to his health condition he has a business in Genting Highlands operating a stall for over a decade. He had been able to resume work at his business by making the drive up and down the highland almost on a daily basis. When Khun Mae visited Kuala Lumpur recently in November  2010, he has been helping to drive the monks around – to Genting and even to send off the monks back by driving them to Johor and then back again to Kuala Lumpur (without staying overnight). 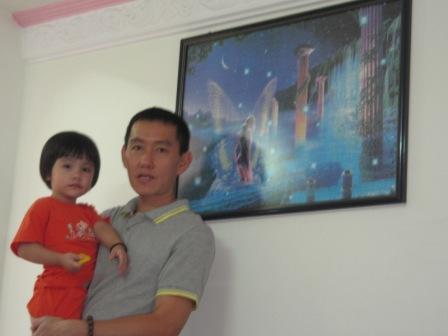 If you had asked anyone 2 years ago, no one would ever thought that this would be possible. Those who know Ah Ho has been very inspired to see the change in him.

Why my luck does not change even though I always p...
The story of a lady with cancer and got well despi...
When the teacher seemed unkind to us
Walking the path and dealing with adversity
Share this:
Dhamma Sharing