In December 2010, Khun Mae had organised the Short Term Ordination for Novices. A number of her disciples send their children to undergo short term ordination in Samnak.

One of the benefits of the ordination is to teach the novice to be independant. And to enable them to experience the Buddha’s teachings more profoundly through ordination. The novices went for morning almsround, perform chanting and meditation practice. During that period, they’ve learned about patience, endurance and hopefully when they go back home, they would lead their lives with the Buddha’s teachings in their mind. 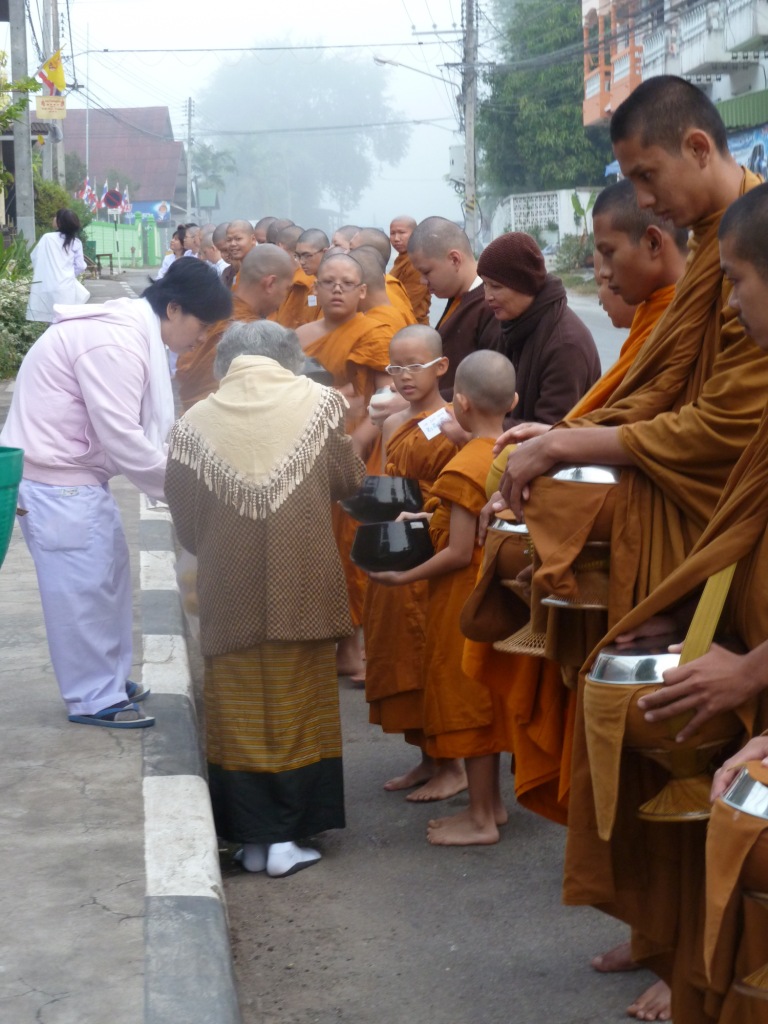 Khun Mae shared with us an experience of a young boy who underwent noviceship at Khun Mae’s temple (in the picture on your left, the boy in question is wearing white specs). (Click HERE to view the sharing from his mother)

The following night, when Khun Mae asked him if he still want to sleep with his mom, he told Khun Mae, “it’s okay, I can sleep by myself.”

Then during morning almround when they were carrying the almsbowl around, people were putting rice. After a short while, the almsbowl became heavy. He told Khun Mae that his arms were painful from carrying the heavy almsbowl.

Khun Mae said that he only need to carry the almsbowl for a while. After that, he can put it down. But his mother had carried him in her stomach for 9 months. Even though her mom felt uncomfortable, she still carried him around, took good care of him without any complaints. Furthermore, when he was sick his mom had to carry him, worry about him and try to pacify him- for if she just put him down for a moment, he would start crying. The unconditional love of his mother made her carry him with her hands- even if it is for the entire night without complaint. As such, compared to what his mom had done for him, would it be alright for him to just endure a short while?

The boy nodded in understanding. After that, he never complained about the almsbowl being heavy anymore.

Khun Mae had spoken highly of the group of children/ teenagers who came for noviceship. She said that during the morning almsround, they went around in the cold weather (December month is cold in Samnak). Yet they all consistently go for almsround without additional warm clothings- the novices only wore the 3-pieced robe. Khun Mae said that she herself had to wear warm clothings as she was unwell during that time.

There was a night where Khun Mere had an all night chanting/meditation session. 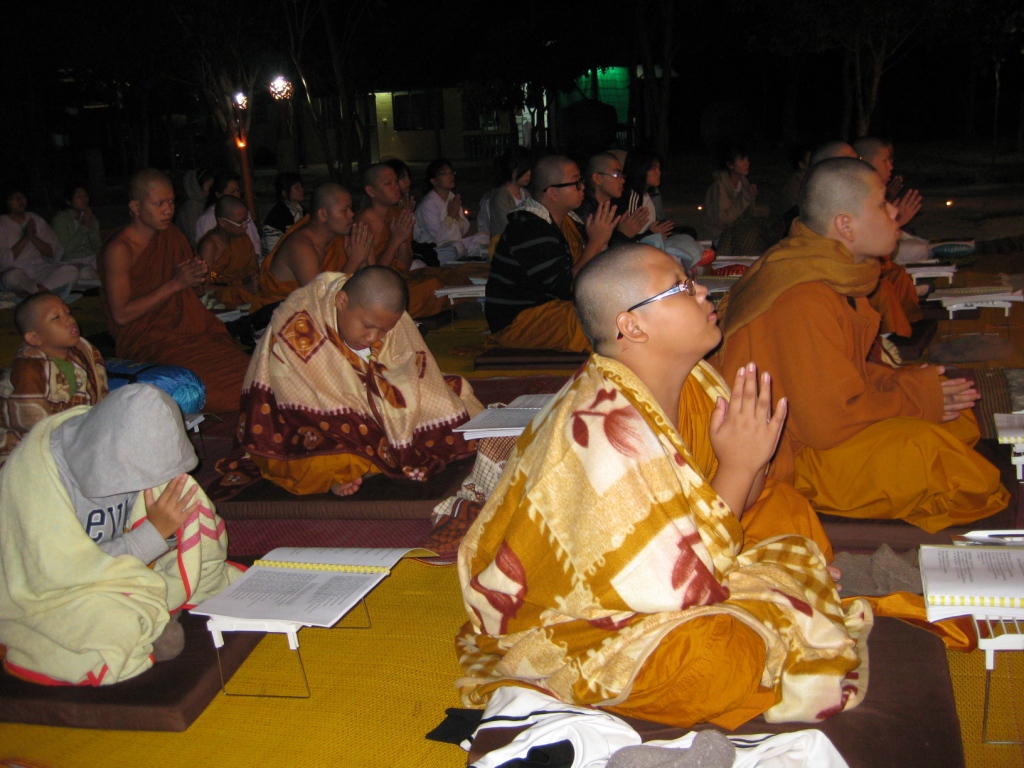 There was initial concerns that this would tax the novices too much as logically they may not be able to endure the entire night without sleeping. What happens if they were to fall sick? Khun Mae was told that if she did that, she may frighten the novices and their parents so much that the next year, no one would want to show up.

But Khun Mae still went ahead with it as she said that now that they’re ordained, she would need to teach them properly. Teach while there is a chance and when conditions are right.

During that night, surprisingly all the novices stayed up. And the next morning, they still went for their morning almsround. And none of the novices fell sick. One even came to Khun Mae and asked when could they do that again.

None of the novices thought that they would be able to stay up all night. And yet, they were willing to give it a try….and they succeeded. To them, it became a sense of accomplishment- thay they could do what they had thought was impossible. After this, they would have more confidence in themselves- in their own capabilities. And as they grow up, this night would be a night that they would not likely forget.

After the ordination event in December, Khun Mae had visited Malaysia and Singapore. The parents were amazed that their children have changed after they have gotten back. One boy initially told his parents that he wanted to stop studying and drop out of school. After the ordination, the boy wanted to continue back with his studies.

Another boy when he first knew Khun Mae did not want to pay respect to her. This time when Khun Mae came to Malaysia and he saw Khun Mere, he respectfully paid respect to her.

As for the boy with white spectacles, his mother told Khun Mae that her little boy changed a lot since he got back to Singapore. He told his mother that he need not trouble her to send him to school everyday.  He said he is now big enough and can take care of himself.

When Khun Mae was at their house, he just came back from school and went straight to do his homework. Khun Mere asked him why he did not take a rest first- and he told her that it’s because Khun Mae had advised him (in Thailand) that he should learn to be responsible- everyday when he comes back from school, he should finish his homework first before rest or play. His mother is amazed and never thought that her son would be so independant and obedient.

She said that her supporters who have donated money to her would aspire that her temple would do good things and “bo boon“, ie a place for them to get merits. They do not have time to come to practice due to busy working life and would wish that they would have merits so that they have the opportunity to practice in future…and may they meet with Nibbana quickly without going through a long route. This ordination event is one of such whereby Khun Mae put the previous donations to good use- buying robes, preparing the sleeping place, food, etc.

Khun Mae always tell people that it’s okay if they want to come to her temple to practice- they’re welcomed even though they have no money so long as their hearts are sincere in practicing.  She said that helping people is so much more meaningful than keeping money in the bank.

(Note from admin: Truth to be told, those of us who followed Khun Mae knows for a fact that Khun Mere is the one teacher who never ‘hoards’ money. In fact, she would utilize donations immediately as to help the donor to gain merits rather than keeping the money in the money for ‘security’ or future use. Khun Mae’s faith in the Buddha is so unshakable and her compassion in helping others can be seen in her daily untiring service to promote and inspire people to practice the Dhamma. Neither would she goes around soliciting donations as she said that’s against Vinaya).

Can we help to extend life of others by offering t...
Significance of praying homage to the Buddha
Watch the arising of the conditions in the heart
Do not judge a person by his/her outward appearanc...
Share this:
Dhamma Sharing

Can we help to extend life of others by offering to shorten our life?