This is part 2 of 2 impromptu stories being told by Khun Mae on 31 July 2008 right after evening chanting.

Once, Khun Mae was staying in a monastery located near a forest. She was at the forest gathering some wood to help to store rice. As she was engrossed in finding the wood, she did not realize that it was quickly getting dark.

She gathered the wood and tried to make her way out of the forest. The walk seemed endless and was very tiring. After seeing the same big tree 3 times, she knew she was lost as she must have kept going round and round.

Khun Mae felt afraid but did not cry. She sat down in meditation and requested Budddha to help her as she did not know where she was. 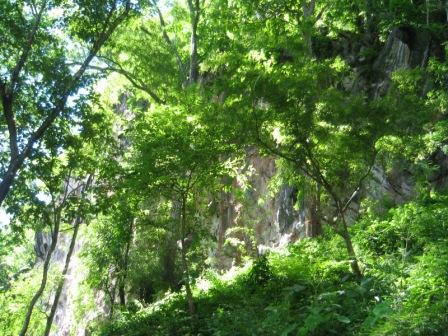 Then, she heard a voice instructing her to look at the direction of the sun. Where did it rise? Where did it set? The temple that she was staying is at the direction when the sun rises, so if the sun was to set, she needed to move to in the opposite direction. Khun Mae chided herself for not having the common sense. She then set off to walk back in the correct direction. As she exited the forest, it was completely pitch dark. She cannot even see the road.

She sat down and meditated again to the Buddha for help. She prayed to Buddha to help light a path for her to be able to see her way back.

Not long later, she saw someone carrying a light and she called the person. The person was actually her friend and she came alone. Her friend told her that six of them actually came looking for Khun Mae. The first five persons went off to one direction and she went the wrong direction.

The strange thing is Khun Mae’s friend actually went the wrong direction because she had seen a light in that direction and thought her five friends were in front but in actual fact, they were somewhere else. Buddha did not directly light up the path but sent for someone to help instead.

After the experience of getting lost in the forest and being helped by the Buddha, her faith deepened and Khun Mae was no longer afraid to go anywhere alone.

Benefits of Chanting
Testimonial on the experience of Short Term Ordina...
The benefits of offering alms food to the Sangha
Self Practice during Wesak Day
Share this:
Dhamma Sharing

When the teacher seemed unkind to us