Khun Mae mentioned this was a true story.

Once, there was a man who was known to be very kind hearted. However one day, when the man went to the temple to do dana (offerings/donations)… a dog staying in the temple….who had never bitten a single person before….pounced on the man and bit him quite badly.

The abbot was very puzzled- he said ‘it was very unfortunate and surprising that the dog (who had never bitten anyone) had bitten you. You are such a kind hearted person and not a bad person at all.” The abbot then suggested to the man not to go home, but instead to stay at the temple to meditate for 3 days. The man followed the advice of the abbot.

However during that time, whenever the man saw the dog- the dog would snigger and make sounds as if it was threatening to bite the man. The man was not happy and wanted to leave but the abbot (who was not sure of the real cause) requested the man to stay.

The man stayed and meditated for about 7 days- and at one point he decided to let go of everything….and he attained calm.

He then saw the nimitta (meditation sign) that both he and the dog were human beings in their previous lives. The man had killed the human (now reborn as the temple dog). When the human was killed, he was very vengeful and angry- and as the result, he was born as a dog. The dog could remember what had happened…but could not speak out his anger.

The man, after seeing this, figured out what to do. He took flowers and candles and took it to the dog. He asked the dog for forgiveness. 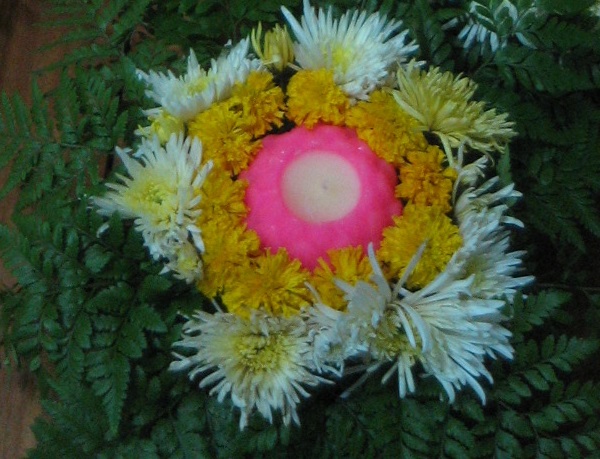 At first, the dog was laying its head on its paws. Then it raised its head to look at him, then put his head down as if as a sign it would not bite him. The man then put his hands in ‘wai’ position and keep paying respect and asking the dog for forgiveness. So long as the dog does not forgive him, so long as he would not leave.

Monks and other onlookers were gathering around and were all very curious at what was  happening. At first, the man did not tell anyone what happened as he did not think anyone would believe him.

After sometime, the dog started to wag its tail. As the dog also was observing the man everyday. The man was wearing the white eight preceptor clothings and the dog instinctively knew that the man was in the temple to do good and to practice. Even a dog could instinctively sense that.

Later, the man made arrangements and paid the temple caretaker to take good care of the dog and ensuring it gets good and sufficient food for as long as it lived. At the same time, the man also did dana (donation) and dedicated the merits to the dog.

Not long later, the dog passed away and was reborned elsewhere.

Through the man’s deeds and practice, the negative kammic link between him and the dog was neutralized.

If you find it hard to relate to the story above, then let’s look within our own life. In each of our lives, we would surely have came across disagreeable people, and those who harmed us for no apparent reason. Perhaps a person could be kind to everyone else but bad to us or the person (in a more powerful position for example our boss or lecturer) took an instant dislike with us. Or someone whom we loved and trust broke our heart. We may have been made to suffer.

The first instinct for many would be to ‘get even’ or ‘take revenge’. The Buddha had taught on kindness and compassion even to our enemies but we may have found it hard to practice and may question the purpose of it.

Hatred can never be overcome by hatred. If it is a negative vicious cycle of ‘an eye for eye’, it would never stop until one person decides to break the cycle through forgiveness and kindness.

Khun Mae often teaches one to forgive and for those who are suffering, to come and observe the precepts- when doing their 5,7, 9 or more days of stay away from their homeland, they were able to let go of their troubles, worries and sadness. Through chanting and meditation they were able to cultivate their mindfulness. When one establishes a foundation of having mindfulness, one is able to get better hold in one’s emotion. Khun Mae would gently encourage a person who is going through hard times to be patient as there are ups and downs cycles in life.

For those who listens and persevere….going against one’s anger and desire for revenge, and instead keep breathing in mind, having understanding, transferring merits, with time, one overcome the negative emotions. The negative relationship with the person is also healed through forgiveness , patience and kindness.

There are many of such instances. Another of Khun Mae’s follower was undergoing a considerably bitter divorce, with possibility of herself and her children being evicted from her home. She came to Khun Mae’s temple to practice for considerable period of time and transfer merits for her practice. Her resolve was tested again and again and she had nearly given up many times had not been for Khun Mae’s constant encouragement. After 9 months of persevering, the lady’s former husband seemed to change and they settled off their differences amicably and could be friends instead of enemy.

When someone harm us, the unpracticed person’s automatic reaction would be to take revenge or get even. In the long run, when we harm others, we only end up harming ourselves and setting ourselves up for future suffering.

Next>  Importance of having gratitude towards our parents

Being patient to those who are mean to you
When the teacher seemed unkind to us
Self Practice during Wesak Day
The Importance of Khanti (Patience)
Share this:
Dhamma Sharing

Strange experience when practicing at the cave

When the teacher seemed unkind to us