When we recall back on our lives…it is not always that we have understood the Buddha’s teachings and got where we are today. Along the line….there are many unseen beings- devas, nagas who have looked after us and keep us from harm and danger.  Sometimes when an ordained person walks past astatue of devas, would put he/she would place the hands together as a sign of respect.  It is not a sign of worship or to pray to them.
..but an expression of gratitude and to transfer merits to them. 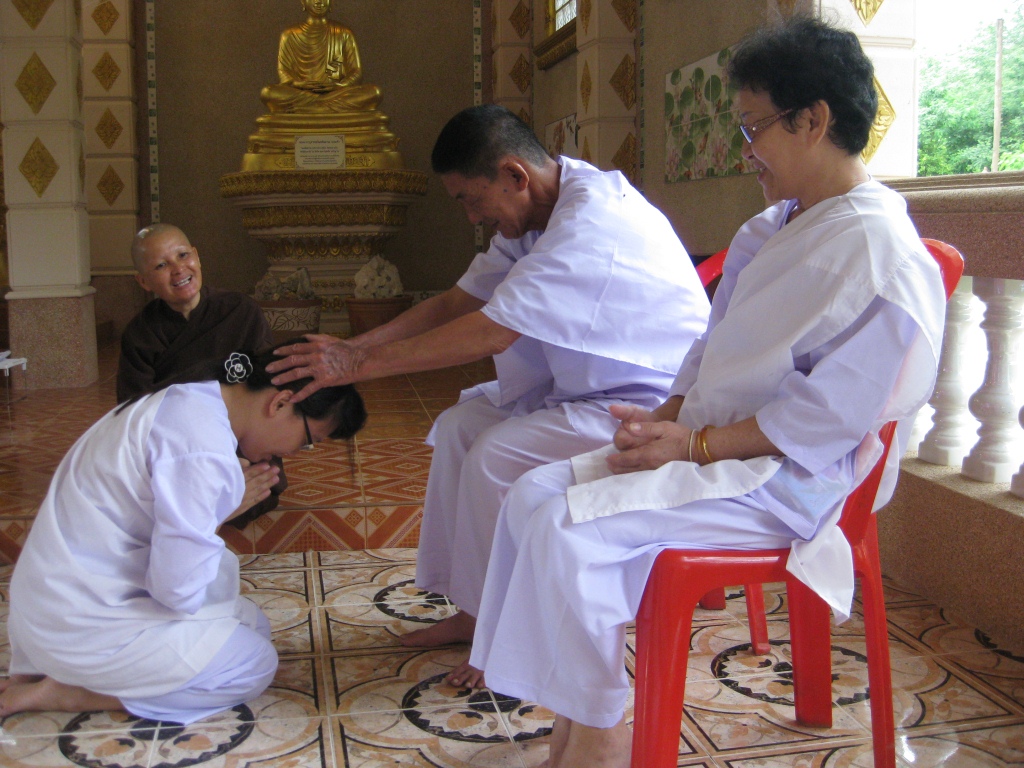 Many parents work very hard snd go through tremedous hardship to put their children through an education. But some children who have grown up started feeling that their parents seems to be not bright (when compared to their social circles or friends’ parents). They may even start to raise their voice, being rude, inconsiderate and look down on their parents…forgetting that it was their parents who helped them get to where they are today.

When a grown child becomes mean and ungrateful to their parents….they would meet with many obstacles and problems in their lives. They would not succeed in life.
There is a follower of Khun Mae who came and consulted Khun Mae for the many obstacles and sufferings that she had experienced for the past 3 years. Outwardly this lady behaved very courteous and polite. But beneath all that…she was very mean and ungrateful to her parents.

After she said that, Khun Mae just reprimanded her for being ungrateful to her parents and told her the source of her problems stem of her bad attitude towards her parents who had worked so hard to bring her up.

One could never tell that the lady was like this as outwardly she was very composed, courteous and spoke softly.

Khun Mae asked her to bow to her parents and asked for forgiveness and wash her parents feet (in Thailand, the custom of washing the feet of elders like parents denotes respect and reverance).  Her parents who were there cried sand keep telling their daughter they forgive her.

She changed her behaviour and slowly her live improve and she became successful.

Another real life story told to Khun Mae by the lady personally. This lady was sent to the temple to stay by her grown up children.

When this lady was young, she did exactly the same thing to her own mother. She had never looked after her mom during her olden days and never bothered to pay her a visit as she was busy with her life. She only found out that her mother had passed away when the temple informed her. She made some donations and requested the temple to take care of her mother’s funeral.

Now that she is old, her daughter is doing the same thing to her like what she had done to her own mother many years ago.

She realized this is the kammic retribution and accepted her kamma. She decided she would practice meditation and chanting in repentance of what she did in the past. She made effort to fully practice.

One day, something strange happened. Her daughter suddenly showed up with her servant wishing to take her back home to take care of her. At first the lady was puzzled why her daughter suddenly had a change of heart. Then she realized that through her practice, she had settled the kamma she had committed.

But then, she declined her daughter’s request. Her days of practice had given her lots of peace and she prefers her life at the temple.

After that, her daughter would then come with her kids to visit her often.

Source: Taken from an informal sharing that Khun Mae has given in Ipoh on 11 Jan 2015

Mindfulness in daily living
Do not judge a person by his/her outward appearanc...
Being patient to those who are mean to you
Managing pain and illness with equanimity and the ...
Share this:
Dhamma Sharing

Can we help to extend life of others by offering to shorten our life?