Note: Originally due to cost constraints, Khun Mae had planned not to hold the event as she does not have sufficient funding to support the event. However, at the request of some of her followers who wishes to participate and also to visit other temples, this event would be held on cost sharing basis for the cost of transportation and expenses.

Offering of flowers, Sanghadana, robes, alms bowl and other requisites.

Note: There is a range as the actual cost would be dependant on the total number of participants who wishes to undergo ordination.

The above would exclude the living and general transport expenses of the said participants during the duration. 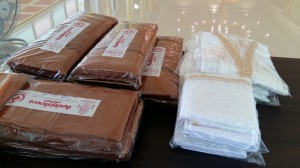 Above: Each time during monks ordination, Khun Mae would provide the special white robes above. The white robes came about from the tradition which begin during the Buddha’s time. A naga (dragon or snake king) had been inspired by the teachings of the Buddha. The naga came down from the heavens and transformed himself into a human form to undergo ordination. However, one day while sleeping, the naga’s real form was revealed and the Bhikkhus were shocked and informed the Buddha. Unfortunately a non human is unable to undergo ordination. The naga made a request that in future those who wishes to perform ordination to kindly wear the white robes in remembrance to the naga who do not have the opportunity to ordain .

This year, the ordination event would be divided into 2 batch due to the number of participants.

For a person who have undergo ordination, one goes through the life of self-reflection. On certain days, morning almsround would be arranged.

During almsround, the items received mainly consist of drinks and packaged food like instant noodles, bread, biscuits, etc. Hence, to ensure everyone are receiving sufficient nutrient and suitable food, Khun Mae would arrange for an in-house cook to prepare and cook the food for the those who attend the event.

Below is the photo of a mealtime preparation where ordained monks are eating from their almsbowl on certain days. 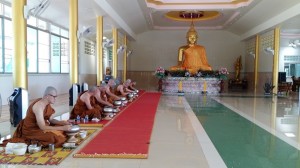 If you would like to participate or support us by contributing to this event, you may contact the following persons:

Or you  may leave a comment with your details and we would respond back to you via email.