In year 2009, I was staying in the cave with a nun, Mae Chee Baibun. There is no electricity in the cave so by 7pm, it is already quite dark.

As it was getting dusk, I went up to the cave first to proceed with my evening chanting(where both Mae Chee Baibun and myself were sleeping at separate tents). Mae Chee Baibun came up later than me. We chanted separately as Mae Chee Baibun would chant the evening chants along side the Thai translations and I did not understand Thai language during that time.

Now the cave is uphill whereas the kitchen/shrine hall area is at the lower part of the hill. 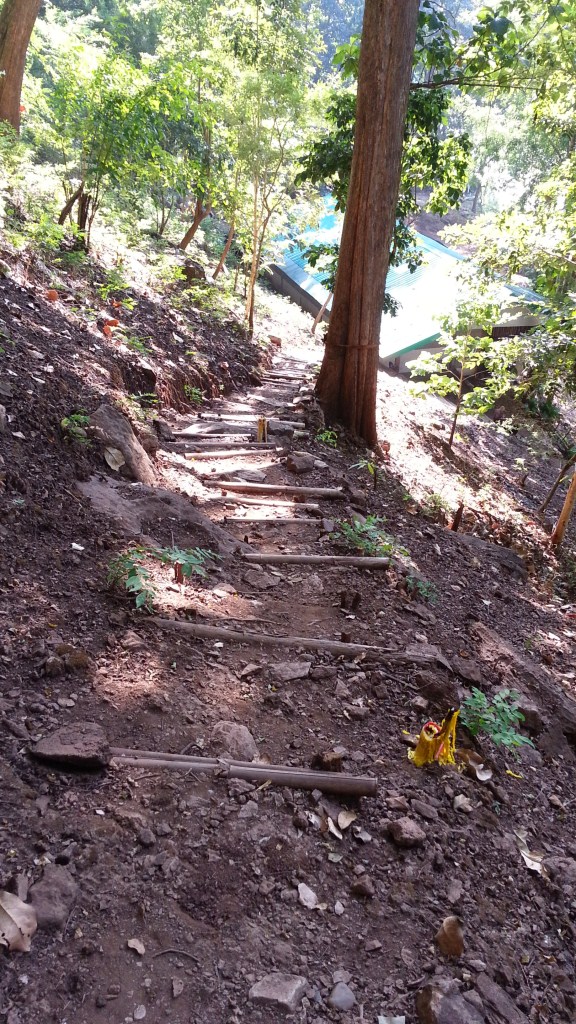 Usually, Mae Chee Baibun would not stay at the kitchen or shrine hall for too long. I estimated that she would be up about 7.40pm or latest by 8pm. After chanting, I decided to go into my tent to do some sitting.

And I made a pledge to myself that I would not get up from my seat until Mae Chee Baibun comes up.

8pm…. and no sign of her. The clock ticked slowly and my legs were killing me. I was wondering to myself why hasn’t she came up yet? After a while, the pain was making me break in cold sweat.

By 9pm, I heard her footsteps walking towards our tents. I heard her voice “Yin?”. It was a question.

I answered from my tent and she went on to chant under the candlelight, then proceeded to rest.

The next morning, I asked her why did it take so long for her to come up? I did not really understand her answer so both of us called and spoke to Khun Mae.

Khun Mae chuckled over the phone as she relayed Mae Chee Baibun’s version. Apparently, Mae Chee Baibun was getting ready to go up when she saw a light coming from up the hills… it was very similar to a torchlight shining down so she thought I was coming down to the hall.

Thinking I am coming, she decided to stay in the hall for a little longer to do some walking meditation. But after sometime, she waited and saw no sign of me, so she finally came up. Only at 9pm.

She called to my tent because she was puzzled as she thought I was shining my torchlight coming down.

Now, the cave is situated near a jungle and facing the river. At night, it is literally pitch dark. Sometimes, villagers would go near the river to catch some fish but they never went up to the cave as they knew we were staying there. Also, there are fireflies at night but their lights are not bright and shining like that of a torchlight.

Hence both of us realized well, the devas wanted us to in our practice. Khun Mae also told me that instead of getting impatient and focusing on the discomfort, had I preservered to practice, I would have progressed in my practice.

Managing pain and illness with equanimity and the ...
No one can make us miserable
Why did Khun Mae wear brown robes
Advise to those struggling with their practice
Share this:
Dhamma Sharing

The benefits of offering alms food to the Sangha

Testimonial on the experience of Short Term Ordination