The photos were taken on 20 May 2019 during Wesak 2019 Short Term ordination event where over 100 life frogs were purchased from the market to be released by the monks and lay preceptors.

There was once a lady who questioned the benefit of liberating animals. Having spent a substantial amount of money over the years to purchase animals such as live fishes, tortoises and even snakes from the market that were on the verge of being slaughtered, she saw no improvement in her family life.

Her grown children and herself were still constantly ill and unwell. Sometimes her business suffer some downturns.

This caused her to doubt the benefit of the practice.

Intention when it comes to animal liberation

Khun Mae asked the lady what was in her mind whenever she performed animal liberation. The lady mentioned she would buy the live animals from the market, take to the place where she wanted to the liberation and then made the wish to have the merits that come from the liberation to extend the life of a particular person, to help to bring more luck, for prosperity, etc.

However, Khun Mae mentioned that if one were to have this mindset (ie wishing for the merits from the act to go towards something), it is as if the act of liberation of life becomes almost like an exchange…for the animal/beings to ‘take over’ the bad luck/ill health of the donor or his/her family.

It is not an act of kindness borne out of genuine compassion to save the life of another being who, like all of us are fearful of losing its life.

The animals, that were being liberated in the wild or their natural habitat may then suffer ill health, being killed or caught back or being eaten by a predator.

Should this happen, the donors would not get what they wish for and therefore may feel there is no improvement at all in their life.

Note: We can make the wish that may the merits go towards something after chanting, meditation practice or doing dana it is different.

When it comes to animal liberation, the more appropriate mindset is to have the genuine intention to save and liberate the life of the animals. While releasing the animals, make the aspiration that may they be happy, may they be able to find a good and safe place to live and be free from predators. This becomes a genuine compassionate act of giving.

And thus, whatever we do would come back to us. We do not need to wish for it.

On 20 May 2019, live frogs (that were sold for slaughter) were purchased from the market. More than 100 frogs were being purchased and placed into two large basin, one of them as per below: 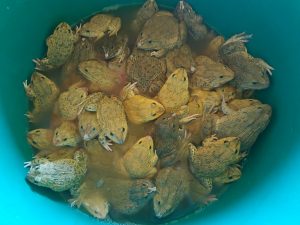 Frogs go into hibernation, which is similar to a meditative state. When they go into hibernation, it becomes very easy for people to catch them- and the frogs usually do not put up a fight when they are being caught during this period…. even though they know they might be killed. 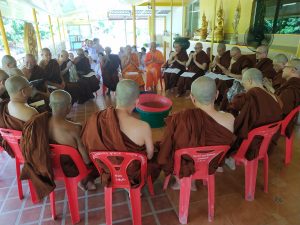 Each monk hold a bottle of water where they poured into the container where the frogs are being placed. The frogs were quiet and not struggling, as if they were listening to the chant. 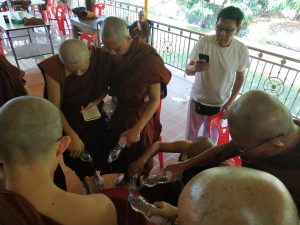 After that, each monk took out about 3 frogs to release at a small waterway located near their kutis. This is followed by the nuns and lay preceptors. We wish the frogs that may they be well and happy, may they be able to find a safe shelter free from predators: 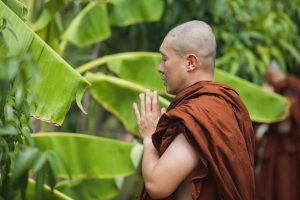 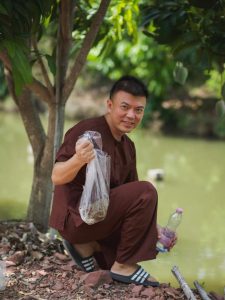 It is observed that most of the frogs, when they are being released, do not immediately hop for their dear lives. Instead, they seemed to wait a little and some of them even hop towards the person who released them. 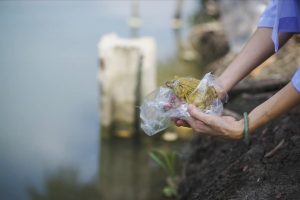 The nuns and lay preceptors bought along a small amount of water to pour on the frogs while transferring merits to them, wishing them well and happiness before releasing them to the water. 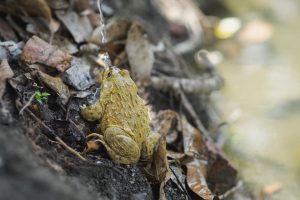 Even though this was done on a hot afternoon, many feel happy to be able to perform the good deed to liberate the life of these animals.

Back to Dhamma Sharing Main Page

When the teacher seemed unkind to us
Experience Sharing from the Short Term Ordination
Paying respects to Buddha at Kong Meng San at Birs...
Managing pain and illness with equanimity and the ...
Share this:

Lessons by the river

Self Practice during Wesak Day