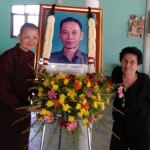 Back to August 2014- Hungry Ghost Festival 盂兰节 Program Below is the donors list who have contributed towards the Sanghadana for monks which includes monks requisities to be offered to monks on 24 August 2014. 1. LIM CHAN OW ONG SHEW WAH LIM SEOW YIAN & FAMILY 2. TING CHUNG ING & FAMILY 3. ONG [...]

Aside from the main building areas, Khun Mae has also arranged for kutis (little cottages) which come in a ready-made form. VIEW DONORS LISTING (SADHU to DONORS)- please read on the IMPORTANT ANNOUNCEMENT ON DONATION COLLECTION       The purpose of the kutis is to enable self-practice in seclusion where one stay alone in [...]

Currently the Dhamma Wheel in Samadhidhammaram Centre (seen during Wesak 2013) is made of polysterene. Khun Mae has planned to arrange for the construction of a permanent Dhamma Wheel. The Dhamma Wheel carries a very significant meaning in Buddhism and a good explanation of this can be found in Wikipedia: In Buddhism, the parts of the dharmacakra [...]

You are at PhotoGallery> Wesak 2013 Event> Group Photos The following group photos were taken during Wesak Day: Above: Khun Mae with those who undergo temporary ordination as nuns (mae chees) from Thailand, Malaysia and Singapore. Photos taken with Nuns and 8 Preceptors. Above: Photos of Khun Mae, Nuns and Khun Mae’s parents, family and relatives.

You are at PhotoGallery> Wesak 2013 Event> Wesak Day (24 May 2012 -24 พ.ค.) Night Chanting and Fireworks At about 7pm, Luang Phor Soh Phon had kindly make the trip to ordain another 4 persons to be samaneras (novice):   This is followed by releasing fireworks as gratitude for Buddha, Dhamma and Sangha (sadhu to those who [...] 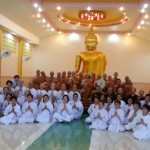 You are at PhotoGallery> Wesak 2013 Event> Ordination on 23 May 2013. Prior to ordination, the ordination scripting had been prepared for novices and mae chees (nuns).  A monk from Wat Khlong Tan and Khun Mae also assisted in helping the soon to be novices and nuns to read through the scripts before the actual [...]

You are at Wesak 2013 Program> Donors List> Explanation on List A- Offerings to Invited Monks We have invited monks to receive your dana item on Wesak Day, and thanks to your support, the contribution to all the 108 places have been fulfilled as of 21 April 2013. All the monks that Khun Mae invited  are monks [...]

In conjuction with Wesak 2013, Samadhidhammaram Centre would be organising a special ceremony (法会). About 108 monks would be invited to the event and there would be temporary ordination for those who wishes to participate. Venue: Samathidhammaram Centre, Samut Sakhon บ้านปฏิบัติธรรมสมาธิธรรมาราม, สมุทรสาคร Duration: 21 May 2013- 2 June 2013 (for those can only come during shorter period- arrangements can [...]