The novices and 8 preceptors would spend time on chanting and meditation. Often, those who are undergoing ordination or being an 8 preceptor are total beginners in chanting and meditation. As a novice, they would learn the basics of paying respects to Buddha and senior monks, taking refuge and chanting the 10 precepts. They would also need to learn the chanting of reflections of the requisites and blessings for those who offer alms and food. Novices would learn quite quickly as they know they need to chant it in front of villagers when going for almsround.

There would be morning and evening chanting.  It is guided by senior monks and they learn through listening and following the chanting pronounciation. During chanting sessions we would have participants reading the Pali chants in 3 languages: Thai, English and Mandarin. Either Khun Mae herself or the nuns would assist in advising which page on which book to turn to for reference- since with the 3 languages we would have a number of chanting books being used. Meaning of certain chants, especially in transferance of merits and metta would be read in Pali and translated in Mandarin and Thai.

Usually, Khun Mae would organise a chanting past midnite or in the past, all night chanting.  It involves chanting the Evening service, followed by the Virtues of the Buddha, Dhamma and Sangha for 108 times.  It is inspiring to know that at least one of Khun Mae’s followers who were unable to make it to Bangkok did the chanting on his own during Wesak from his home in Singapore, starting the same time as us in June 2012. 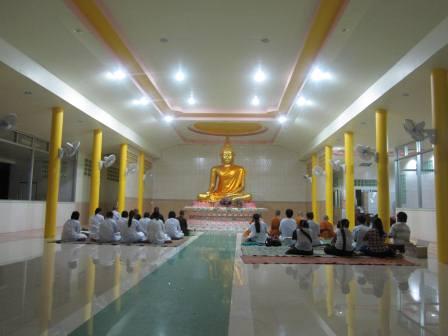 Khun Mae had always advocated on the benefits of chanting. Khun Mae had consistently practiced chanting and it is never something that she ever neglected. When she had to work like cutting grass and building the temple, she often chanted in her heart.  It is hoped that the novices who have resumed lay life would continue chanting daily and do not neglect the practice.

Generally sitting would be before or during chanting. One can also practice meditation during intervals like rest time in the afternoon. Khun Mae herself teaches breathing exercise or repetition of Buddho, Buddho – a simple meditation technique that can be done at all time- not only when one is sitting on the cushion. Depending on the situation, there may be variants to the method to suit the temperament of the person. When one is feeling stressed, angry, overwhelmed, worried or down with illness (including terminal illness), Khun Mae asked them to breathe in, stop, then breathe out long and short. For those who are feeling afraid, unwell or experiencing obstacles, Khun Mae advised to follow the breathing method and transfer merits.  The purpose is for one to develop mindfulness- and one should always try to remember to be aware of our breath.

The method seemed so simple but it works if one practices with faith. When practicing in the forests and cemetries, Khun Mae could endure hours being seated in meditation. But she knew that very few people would be able to put up with the discomfort and pain from hours of sitting- hence Khun Mae realised that through consistent practice of focusing on the breathing, one could develop sati (mindfulness). With mindfulness, one is able to be aware of the arising of emotions and feelings and let go of them before they overwhelm them.

This is the basic meditation that Khun Mae taught to lay followers. For those advanced meditators, Khun Mae also have a different set of advice. Most important, Khun Mae said the answer to everything is within the body. When mindfulness is sufficiently developed, one should use it for body contemplation.

One should not ‘look outwards’- for instance seek after light, external things or travel to different realms or calmness without wisdom. By doing that, one is only wasting one’s precious time in practice- for one would not know how long one would live and have the chance to practice.