Before ordination, the soon-to-be novice would need to seek for forgiveness from parents (if they are present) or guardians. A senior respected monk who is a Upajjhāya (Preceptor) would be invited to perform the ordination.

A prepared set of robes would be formerly offered by the parents/senior family member/ representative to the person who wishes to ordain. Upon receiving the robes, he then carry them on his forearms with his hands joined in a gesture of respect. Placing the set of robes respectfully, the novices then a tray of offerings (flowers, etc) and respectedfully offer to the Upajjhāya (Preceptor) while prostrating themselves 3 times before the Upajjhaya. Then each one would then kneel down, carrying the set of robes on their forearms, and joining hands in gesture of respect utter the Pali passages in going forth: Then the Upajjhāya will receive the applicant’s set of robes. Having placed it in front of himself, he instructs the applicant on the basic knowledge of the Triple Gem (the Buddha, the Dhamma and the Sangha), telling him how he can go to it for the refuge (as moral conduct, meditation and wisdom) and how he can benefit by being ordained. After that the Upajjhāya tells him to commit to memory the following five unattractive parts of the body, and after explaining the meaning and purpose of doing so, recites them in normal and reverse orders. The applicant will then repeat them after him, word by word, as follows:

The Upajjhāya now takes the Aṁsa (the shoulder-cloth worn across the left shoulder) out of the set, puts it over the applicant’s head covering his left shoulder.

3. He then hands back to him the rest of the robes, teaching him how to put them on. He then orders the applicant to go out and put on these robes. A Bhikkhu leaves the assembly to help him. The applicant then carries the set of robes on the forearms as before, with hands joined in the gesture of respect, backs out (walking on his knees) to the edge of the platform/ hall before walking to a suitable place where he will put on the robes.

When he has put on the robes, he goes and prostrate three times (with, as usual the five-point prostration), the applicant, kneeling down, reciting the following passages: Then the Ācariya (the Teacher or elder Bhikkhu) thrice recites the following preliminary passage in Pāli which the applicant should repeat when he has finished. The passage is as follows: After instructing the applicant to concentrate his mind on the Triple Gem, the Ācariya chants and the applicant repeats, sentence by sentence, as follows:

Now the Ācariya tells the applicant that the ordination as a Sāmanera (novice) is completed. Since he is now a Sāmanera he has to study and practice the Ten Precepts for Sāmaneras. He should chant them after the Ācariya, clause by clause, as follows:

The Preceptor would then followed by advise to the newly ordained novice example on observance of precepts, intend and sincerity in practice. The newly novice would then pay respect and offer Sanghadana. After that, the Preceptor and senior monks would chant transferance of merit. The novice to dedicate the merits from the ordination to his parents and guardians- may they rejoice in the merits. In Thailand, this is often followed by the symbolic pouring of water as transferance of merit is recited: How to chant (audio): To learn how to chant the script, you may refer to this video The Buddhist Ordination Chanting by Phra Maha Nayok of Wat Bowonniwet Wihan– the first 6 minutes is for novice and after that is for Bhikkhu.

Asking Forgiveness from the Buddha:

Asking Forgiveness from the Dhamma:

Asking Forgiveness from the Sangha:

Source of photos above:

Novice ordination from a Buddhist in Sabah on 3 June 2015. 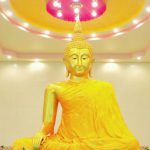 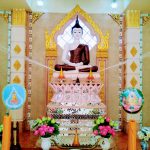 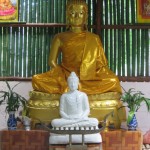 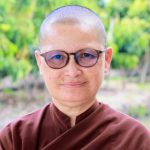 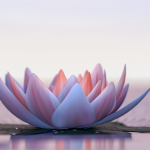