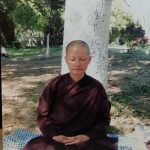 Back to Dhamma Sharing According to Khun Mae, emotions like anger have no mother or father. They arise, the pass away. ‘No mother or father’ means there’s no cause. Therefore, what’s the point of letting anger manifest? Then I asked Khun Mae about kilesas (defilements). I thought that she had told us that kilesas would [...] 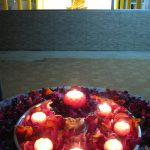 Someone raised a question to Khun Mae- asking if we can offer to shorten our lives in return to extend someone’s else life. It seemed that there was recorded case in history indicating that it was possible. Khun Mae said that we cannot exchange our lives or sacrifice our lifespan for others. If it seemed [...] 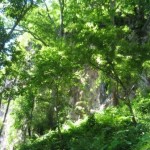 Back to Dhamma Sharing This is part 2 of 2 impromptu stories being told by Khun Mae on 31 July 2008 right after evening chanting. Once, Khun Mae was staying in a monastery located near a forest. She was at the forest gathering some wood to help to store rice. As she was engrossed in finding [...] 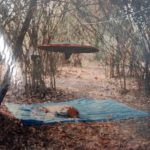 Back to Dhamma Sharing This is part 1 of 2 impromptu stories being told by Khun Mae on 31 July 2008 right after evening chanting. Long time ago before Khun Mae started Samnak, Khun Mae was staying in a temple. Khun Mae  did her daily tasks like sweeping and helping to clean the monastery. After [...] 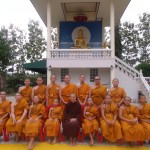 Click to view more photos and experience. The following testimonial and photos were contributed by Xiao Yan, a mother and a participant of the Temporary Ordination held in Samnak (December 2010). Thanks Xiao Yan. My initial purpose was to get my boys to be independent and responsible. As a modern and typical Singaporean, I was very [...]

In December 2010, Khun Mae had organised the Short Term Ordination for Novices. A number of her disciples send their children to undergo short term ordination in Samnak. One of the benefits of the ordination is to teach the novice to be independant. And to enable them to experience the Buddha’s teachings more profoundly through [...] 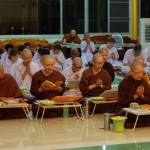 Chanting as good as listening to the Buddha giving a Dhamma talk. Khun Mae advised thatit is important if we really want to walk the path. If we don’t even understand simple things like meaning of “Namo Tassa” and how to chant transferance of merits, it is as of we do not believe in [...] 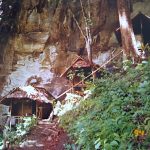 Back to Dhamma Sharing Often, people who see Khun Mae would enviably end up sharing with Khun Mae how their lives have been unhappy because of their spouse, children, boss, relatives, friends, etc. Khun Mae would patiently listen and then teach them skillful ways of dealing with their personal issues. For different people, Khun Mae would teach [...] 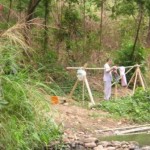 Back to Dhamma Sharing Most of us would always be curious about our fate and the future. As such, people would come to Khun Mae to request Khun Mae to see and tell their fate and future. Should they change job? Get married to a particular person? Open a business? Travel overseas? etc…. Who is [...]