Note: This is quite an important sutta and chanted in many temples in Thailand- the sutta details about the Buddha’s attainment and stages. The translation below is done by listening to the chant and based on an earlier (but not very clear) translation. We have tried to place some verses closer to Pali for easier [...]

On one occasion when the Buddha, accompanied by a large following of monks ws returning from their morning alms round, they were confronted by a raging forest fire. Fearing for his safety, the monks rushed to his aid only to find him standing right on the path of the raging fire un-scorched.  Amazed by [...]

Once when the Buddha was residing at Jetavana monastery, he delivered the Jataka Story about a golden peacock who was a Bodhisatta. He related this story to one of his disciples who had been enchanted by a woman.  At one time a golden peacock (a Boddhisatta) lived on the golden hill of Dandaka in the [...]

The discourse on the Group Protection is mentioned in the Khanda Vatta Jataka Story. According to the story, the Bodhisatta (the future Buddha) was an ascetic in a previous life. He heard his fellow ascetics complaining about the dangers from snakes and other creatures. He therefore instructed them to recite this protective Khanda Paritta not [...]

Once the Buddha was residing at Jetavana Monastery in Savatthi for the Rain’s retreat. Five hundred monks approached the Buddha and requested for a suitable object for meditation. Having obtained a suitable object of meditation, the monks withdrew to a distant forest, near Mt Himavanta for the rainy season. They took shelter under huge trees [...]

When the Buddha was residing at Rajagaha, three kinds of disaster struck the city of Vesali. The people were faced with famine, disease and harm caused by evil spirits. Thousands of people died, and the remaining citizens of the city were desperate for help. Suggested inviting the Buddha, the Great Compassionate One. On receiving the [...]

The Story Behind Mangala Sutta The word “Mangala” literally means “blessings”, “auspicious signs” and “good omen”. Every one including the devas (gods) wants to know what constitutes a “blessing”. For twelve years they argued about it and could not come to an agreement. Some thought that “blessing” refers to what is pleasurable to the [...] 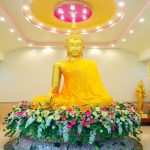