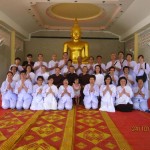 Here are the group photos of those who have participated in the Buddha Installation at Samadhidhammaram Centre on 24 October 2012. Thank you for coming and for your support a success. Khun Mae expressed her gratitude to all who gave moral and/or material support. May all rejoice in the merits of this meritorious event. Sadhu! [...]

Snapshots of the Cave taken during rains retreat (vassa) in 2011: , Khun Mae stayed in the Cave and build a simple structure to house the kitchen. Usually during the vassa, the river water would be high- as it rains and the accumulated water from the mountains above gushed down in the river. Crossing the [...]

Back to PhotoGallery Below are preparation done through the help of Khun Mae’s followers who worked hard, some throughout the night to complete the decorations and arrangements.     The moon that night was exceptionally beautiful- there was a clear halo on the moon which could not be captured effectively on film but was witnessed [...]

Here are some group photos taken on 29 May 2010. Majority consists of Khun Mae with her followers from Malaysia, Singapore and US: Above: Samaneras undergoing temporary ordination in Samnak in conjuction with this event. Sadhu to everyone who managed to take time off your busy schedule to attend this auspicious event. It has been [...]

After the blessing services, Chao Khun (senior monk overlooking 5 provinces in Northern Thailand) arrived in late morning: After the offerings were made, the members of the Sangha and everyone ajourned to lunch. Later in the afternoon, a few of our friends from Singapore had the opportunity to receive samanera ordination directly from Luang Phor: [...]

Back to PhotoGallery To commensurate the 10 year anniversary of Samnak, a series of events was being held. On 27 May 2010 (Wesak eve), a special blessing service was held: We started with the early morning chanting before dawn: The District Head officiate the initial ceremony: The special chanting lasted for few hours- to invite [...]